Digestion involves the breaking of complex organic food molecules into simpler one by hydrolysis. Carbohydrates, proteins, fats and nucleic acids are large complex organic food molecules. They are insoluble and polymeric in nature. During digestion different enzymes helps in the breakdown of these complex polymers into soluble monomers which are required for energy generation.
The different steps of digestion involve:

It provides continuous supply of nutrients, vitamins, electrolytes and after. The following steps involved to achieve this.

Human mouth consists of vestibule and oral cavity. The slit-like space between cheeks and gums is known as vestibule. The cavity surrounded by palate, tongue and teeth is known as oral cavity or buccal cavity. Mouth is the first passage of food where large piece of food is fragmented into small pieces with the help of teeth and mixed with saliva. Tongue manipulates food during chewing and mixing with saliva. This mixture of food with saliva, bolus, is then moved inward through the pharynx into Esophagus. This process is known as deglutition or swallowing.

It is also known as food pipe or gullet, is about 25 cm long. It presents behind the trachea and heart. Its primary function is to conduct food from pharynx to the stomach. Food in oesophagus is pushed downward by involuntary muscle contraction of circular muscle, this movement is called peristalsis. Due to contraction of the longitudinal muscles lower part of oesophagus become short which pushes its wall outward so that it can receive the bolus. The circular muscles of oesophagus then relax. The contractions are repeated in a wave that moves down to the stomach as shown in Figure. The cardiac sphincter lies between oesophagus and stomach allows the conduction of bolus into the stomach. The sphincter closes again. Medulla oblongata controls the peristalsis. 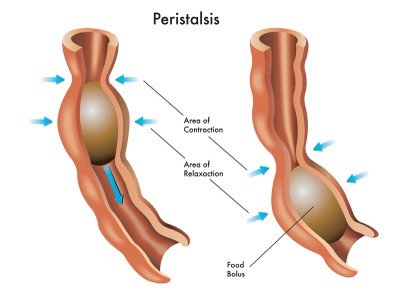 It is the widest organ of the alimentary canal. The figure shows the anatomy of the stomach and Table give the detail of enzymes. It is divided into two major parts 1) the body and 2) the antrum. Physiologically we can divide it into 1) the orad portion (first two third of the body) 2) the caudad portion (remainder portion of body and antrum). As food enters in the orad portion of the stomach, it forms concentric circles. When food stretches the wall of the stomach, vagovagal reflex travels from stomach to brain and back to stomach. Due to which the tone of muscular wall of stomach body reduces and the wall starts bulging out so that it accommodates greater quantity of food. In the completely relaxed stomach, 0.8 to 1.5 litres food can occupy. After mixing of food with the stomach secretions, the resulting mixture is called chyme, further passes down the gut. Partial digestion of food (protein and fats) takes place here. It produces castle’s intrinsic factor which is required for the absorption of vitamin B12 to be absorbed through intestinal wall.

It comprises three parts viz. duodenum, jejunum and ileum. Due to its small diameter, it is named so. The length of small intestine is correlated with the height of person but not with the weight. It is about 6.25 meters long. Thus, it is the longest part of the alimentary tract. Chyme is conducted through small intestine by peristaltic movement. When chime stretches the intestinal wall, it elicits localized concentric contractions spaced at intervals cause segmentation of small intestine. In such a way chyme moves toward the anus at a speed of 0.5 to 2.0 cm/s. Movement in proximal parts is faster than terminal portion. During movement of chyme through small intestine complete digestion of proteins, carbohydrates, fats and nucleic acids occur.

Its diameter is always larger than small intestine but it varies from one region to another. It is about 1.5 m long. It is divided into three parts: cecum, colon and rectum. Cecum is a pouch type structure. The outgrowth of cecum is a vestigial body known as vermiform appendix. The cecum is more developed in herbivorous mammals than carnivorous. The junction of ileum with cecum is guarded by the ileocecal valve. The function of this valve is to prevent backflow of fecal contents from colon to ileum. The valve can resist back pressure of at least 50 to 60 cm of water.
The main functions of the colon are

The primary function of secretary glands is the secretion of digestive enzymes for digestion of food and mucus for lubrication and protection of tract. Most digestive secretion occurs in precise amount only in response to the presence of food in alimentary tract. We have discussed major digestive glands.

The major gland of salivation is parotid, submandibular and sublingual glands. Along with this, there are many small buccal glands. A Healthy individual secretes about 0.8 to 1.5 litres of saliva daily. Saliva mainly composed of two major type of proteins. A) Ptyalin (an α-amylase) – for digestion of starch, B) Mucin – for protection of surface. Parotid glands are larges salivary glands situated near ears. The parotid glands secrete mainly ptyalin, whereas submandibular and sublingual glands secrete both ptyalin and mucin. The small buccal glands secrete only mucus. The pH of saliva is between 6 to 7 which favours the digestive action of ptyalin.

The oesophagal glands secrete only mucous which provide lubrication for swallowing.

It is larges gland of the body, mainly secrete bile normally between 0.6 to 1 litre/day. Bile serves two major functions.

The pancreas is soft lobulated large compound gland whose internal structure is similar to salivary gland. It lies parallel to and posterior to stomach. Pancreatic acini secrete digestive enzymes whereas a large amount of sodium bicarbonate solution is secreted by small ductules and larger ducts. The mixture of enzymes and sodium bicarbonates passes through a long pancreatic duct. Pancreatic duct joins with hepatic duct before it empties into duodenum through the papilla of vater. Pancreatic secretion contains enzymes for digesting all three major food component: carbohydrate, protein and fats.

These are formed by modification of surface epithelium of small intestine. The two main intestinal glands are Brunner’s gland and Crypts of Lieberkühn.

It is the process by which simpler nutrients (monosaccharide, amino acids, fatty acids etc.) pass from alimentary tract into blood and lymph. It can occur by simple diffusion, facilitated diffusion, osmosis and active transport.

Absorption starts from stomach but it is poor absorptive area because here junction between epithelial cells are tight junction and villi are absent on its inner wall. Little amount of water, salts, alcohol, few drugs and moderate amounts of sugar are absorbed through stomach. Absorption of nutrients mainly occurs in small intestine. Vitamins produced due to bacterial digestion and water absorbed in large intestine.
Intestines absorb collective amount of ingested fluid and fluid secreted in gastrointestinal secretions. Throughout the inner wall of small intestine, many folds called valvulae conniventes (also known as folds of kerckring) present, which increases the surface area for absorption. The valvulae conniventes covered by small protrusions known as villi (singular ‘Villus’). Figure shows the longitudinal section of the villus.

Absorption of water: Osmosis helps in the absorption of water in small intestine through epithelial cells surface and villi into the blood capillaries. In order to maintain the osmolality, electrolytes and digested food absorb along with water.

Finally, all absorbed nutrients transported by blood and lymph further transferred to blood circulation. With the help of blood, nutrients reach to target body cells, where it become integral component of protoplasm and used for energy, growth and repair. This process is known as assimilation.

The excess of monosaccharide stores in liver and muscles in the form of glycogen by the process called glycogenesis. Excess of amino acids are converted into glucose and then to fat through an irreversible reaction and then stored. Most of the fats stored in subcutaneous layers and mesenteries.

Take a quiz on the human digestive system