Hemichordates are vermiform, solitary or colonial enterocoelous coelomate animals having intra-epidermal nervous system and a pre-oral gut with or without gillslits and without typical nephridia.

Due to some similarities with chordates, some workers (Bateson, 1885) considered Hemichordata as a subphylum of the phylum Chordata.

Alliance with the chordates was based on the presence of gill slits and the so called ‘notochord’.

It is now generally agreed that the hemichordate “notochord” is neither analogous nor homologous with the chordate notochord and that except the common possession of pharyngeal clefts the two groups are dissimilar.

On grounds of its similarities with invertebrates some recent scientists, like Van der Horst (1939), Dawydoff (1948), Marcus (1958) and Hyman (1959), have given it the status of an independent invertebrate phylum.

Since the group comprises of only about 100 species, it is included in the category of a minor phylum.

The name Hemichordata (Gr. hemi-half, chorde-cord) means they are half or part chordates, a fact that is undisputed.

Body wall of a single-layered epidermis with mucus glands. No dermis.

Foregut gives out a hollow buccal diverticulum into proboscis, earlier considered as “notochord”.

Circulatory system simple and open, including a dorsal heart and two longitudinal vessels, one dorsal and one ventral.

Excretion by a single proboscis gland or glomerulus connected to blood vessels.

Buccal diverticulum From the root of buccal cavity (lying inside collar region), a short, stiff, thick-walled, hollow projection extends forward through the proboscis stalk into the proboscis coelom. Its wall is composed of a single layer of tall, slender, vacuolated endodermal cells. For a long time it was considered a notochord (Bateson, 1885), or stomochord (Willey, 1899 and Dawydoff, 1948). Histologically as well as developmentally, it is quite different from the true notochord of other chordates, but resembles the wall of the buccal cavity. To most modern workers it is only a preoral extension of buccal cavity, so that, Hyman preferred to use the non-committal term buccal diverticulum for this tubular outgrowth of buccal cavity.

Hemichordates are generally grouped under two classes, Enteropneusta and Pterobranchia. Besides, two more classes are included by some, as discussed below

Body elongated, vermiform, with no stalk.

Development direct or with larval stages. Asexual reproduction by budding in some.

The class is divided into two orders Rhabdopleurida and Cephalodiscida.

The fossil graptolites (e.g., Dendrograptus) were abundant in Ordovician and Silurian periods and often placed as an extinct class under Hemichordata.

Their tubular chitinous skeleton and colonial habits show an affinity with Rhabdopleura.

Due to peculiar anatomical organisation and embryology, the hemichordates, have been considered closer to the chordata as well as most non-chordata phyla by different workers from time to time. Some of these views regarding the phylogenetic relationships (affinities) of the hemichordates are summarised here.

Presence of the three fundamental chordate characteristic in hemichordata; that is, (i) a notochord, (ii) a dorsal hollow nerve cord and (iii) pharyngeal gill-slits (pharyngotremy).

Moreover, the structure and function of pharynx and branchial apparatus are similar to those of Urochordata and Cephalochordata (sub-phyla of Chordata).

Due to these similarities Hemichordata had been considered as a subphylum of the Phylum Chordata till recently, representing its lowest group, and probably having a common ancestry

However, the hemichordates are no longer included under chordates because:

Feeding and burrowing habits are similar in Balanoglossus and Nemertinea (Nemertea).

Body in both is elongated, vermiform, without external metamerism, with terminal anus, with smooth skin containing unicellular glands and ectodermal nerve plexus, and having metamerically arranged simple gonads.

Objections: But Nemertinea differ from hemichordates in lacking a dorsal nerve cord and in having lateral nerve cords and a protrusible proboscis.

Paired gastric diverticula of Phoronis, like the buccal diverticulum of Balanoglossus, forming so called notochord.

Both have great power of regeneration.

Objections: But the chordate features of Balanoglossus like pharyngeal gills, are absent in Phoronis which also differs in having paired metanephridia.

Burrowing habit, tubicolous life and ingesting mud which is passed out as castings through anus.

Collar of Balanoglossus is similar to clitellum of an earthworm.

Proboscis and prostomium similar and preoral.

However, the two groups also show some striking differences as follows:

Enterocoelic origin of coelom and its division into three successive parts.

Heart vesicle and glomerulus of enteropneusts are considered homologous to the dorsal sac and axial gland of echinoderms.

Common habits and ecological niches and remarkable power of regeneration.

Proboscis coelom opening to outside by proboscis pore of tornaria comparable to hydrocoel of echinoderm dipleurula.

Blastopore becomes the anus (Deuterostomia) and digestive tract is complete with mouth, anus and same parts.

Some important examples of Phylum Hemichordata

Its generic name was derived from two Greek words, balanos and glossus. Term balanos means an “acorn” (fruit of oak) and refers to the proboscis projecting from collar looking like an acorn-nut, hence the common name “acorn worm”. Term glossus means “tongue” and refers to the shape of its proboscis, collar and genital wings bearing a close resemblance to an ox tongue, hence the common name “tongue worm”.

Body is soft, elongated, worm-like, cylindrical and bilaterally symmetrical but unsegmented. It is divided into anterior-most proboscis or protosome, middle collar and posterior long trunk with terminal anus.

Proboscis appears as a tongue-like projection.

Collar is the muscular region which bears mouth ventrally below the proboscis stalk.

Trunk is divisible into three regions :

Coelom is spacious and lined by coelomic epithelium and is enterocoelous in origin.

The animal lives inside a U-shaped tube or burrow with two vertical limbs and two openings.

The worm moves in its burrow by cilia covering its body surface although the worm is sluggish and little affected by external stimuli. The proboscis is the most active part which helps in burrowing.

Balanoglossus feeds on diatoms, protozoans, other microorganisms and organic detritus by swallowing sand or mud.

Balanoglossus is a ciliary feeder and the lateral cilia lining the gill slits set up a current of water which enters through the mouth, takes its course through the buccal cavity, pharynx, gill slits and branchial sacs and leaves through the gill pores. This is known as respiratory-cum-food current.

Respiratory apparatus of Balanoglossus comprises : (i) branchial portion of pharynx bearing gill-slits, and (ii) branchial sacs that open out through gillpores.

Blood vascular system of Balanoglossus is of the open or lacunar type. It consists of : (i) a colourless blood, (ii) a central sinus and a heart vesicle, (iii) distributing vessels or arteries and sinuses, and (iv) collecting vessels or veins.

The excretory organ is glomerulus or proboscis gland lying in front of the central sinus and projecting into the proboscis coelom. It excretes brown or yellow granules.

Nervous system is of primitive type resembling that of coelenterates and echinoderms.

Sexes are separate i.e., dioecious and males and females live in separate tubes. Fertilisation is external as gametes are shed in sea water and fuse there.

Development is indirect with a free swimming planktonic ciliated larva, the tornaria larva.

It does not reproduce asexually but it has great power of regeneration. 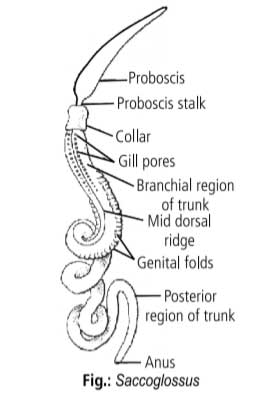 It is a typical enteropneust genus very much similar to Balanoglossus in habitat, habits and structure.

Genital wings and hepatic caeca are absent. Mature gonads are yellow in male and grey in female and their position marked externally by dorsolateral genital folds in the middle part of the trunk.

Development is direct without a free-swimming tornaria larva.

This genus also bears a close resemblance to Balanoglossus, ecologically as well as morphologically and embryologically.

Its proboscis and collar are somewhat shorter, but the trunk possesses conspicuous genital wings and hepatic accusations.

It is a marine, sedentary and colonial pterobranch mainly found in the North Atlantic. The colony consists of horizontal branching gelatinous tubes, forming the coenoecium, which remain attached on hard substratum.

Erect tubes, about 6-7 mm in height, arise at short intervals, each housing an individual or zooid of the colony.

Alimentary canal is U-shaped so that anus lies near mouth.

Gill-clefts and glomerulus are absent.

Sexes are separate but a colony has both male and female individuals.

A single gonad is present on the right side of the trunk.

Basally the trunk of each zooid is attached by a long contractile muscular stalk to a common cord of living substance, called black stolon or pectocaulus, running inside the horizontal tubes

It is a sedentary and gregarious pterobranch found mainly in the seas of Southern Hemisphere at depths of 50 to 650m.

Several zooids live in separate upright gelatinous tubes secreted by them and embedded in a common matrix called coenoecium, fixed permanently to substratum.

The zooids remain unconnected organically and thus do not constitute a true colony. Each zooid is 2 to 3 mm long and has the usual three body divisions – proboscis, collar and trunk. Proboscis is sheild-shaped, overhanging the mouth.

The trunk is short and plump bearing a single pair of gill-slits without skeletal support.

Alimentary canal is U-shaped with ventral mouth and dorsal anus located at the distal end.

A narrow elongated contractile stalk arising from the aboral end attaches the zooid to its tube.

Sexes are separate, gonads a single pair and development direct.

It is a sedentary and solitary pterobranch genus clinging to hydroid colonies by its
long stalk and closely resembling Cephalodiscus. A coenoecium is lacking.
The zooid measures 1-5 mm in length with usual three divisions of the body.
• One pair of pharyngeal gill-slits are present. 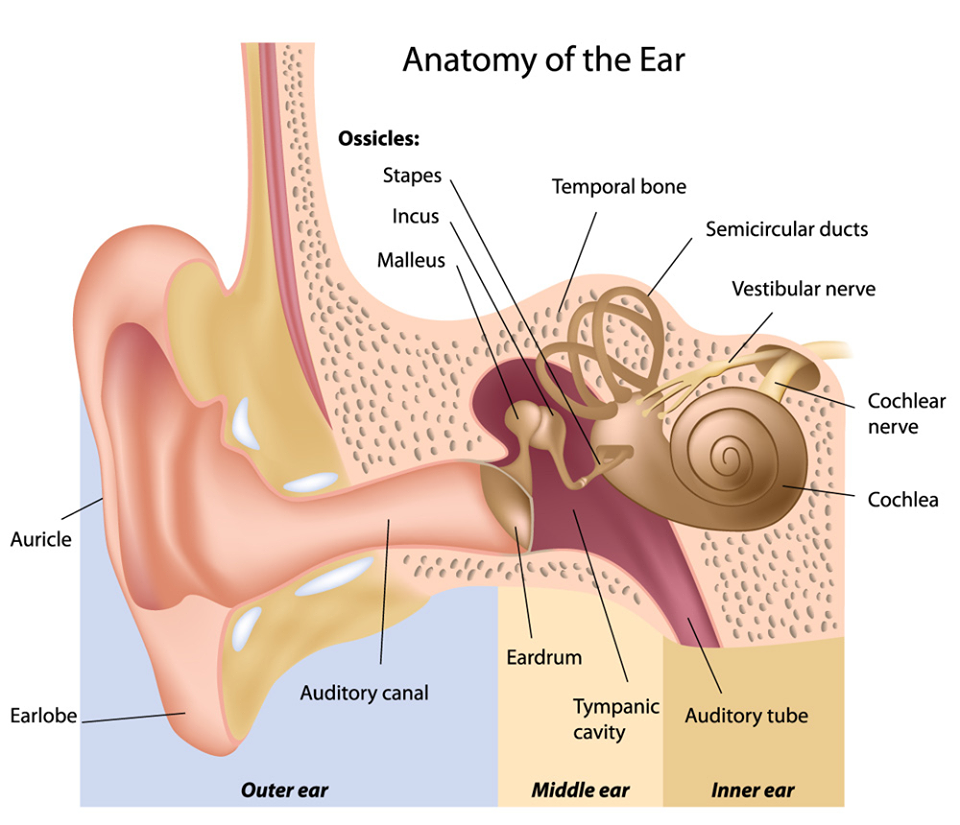 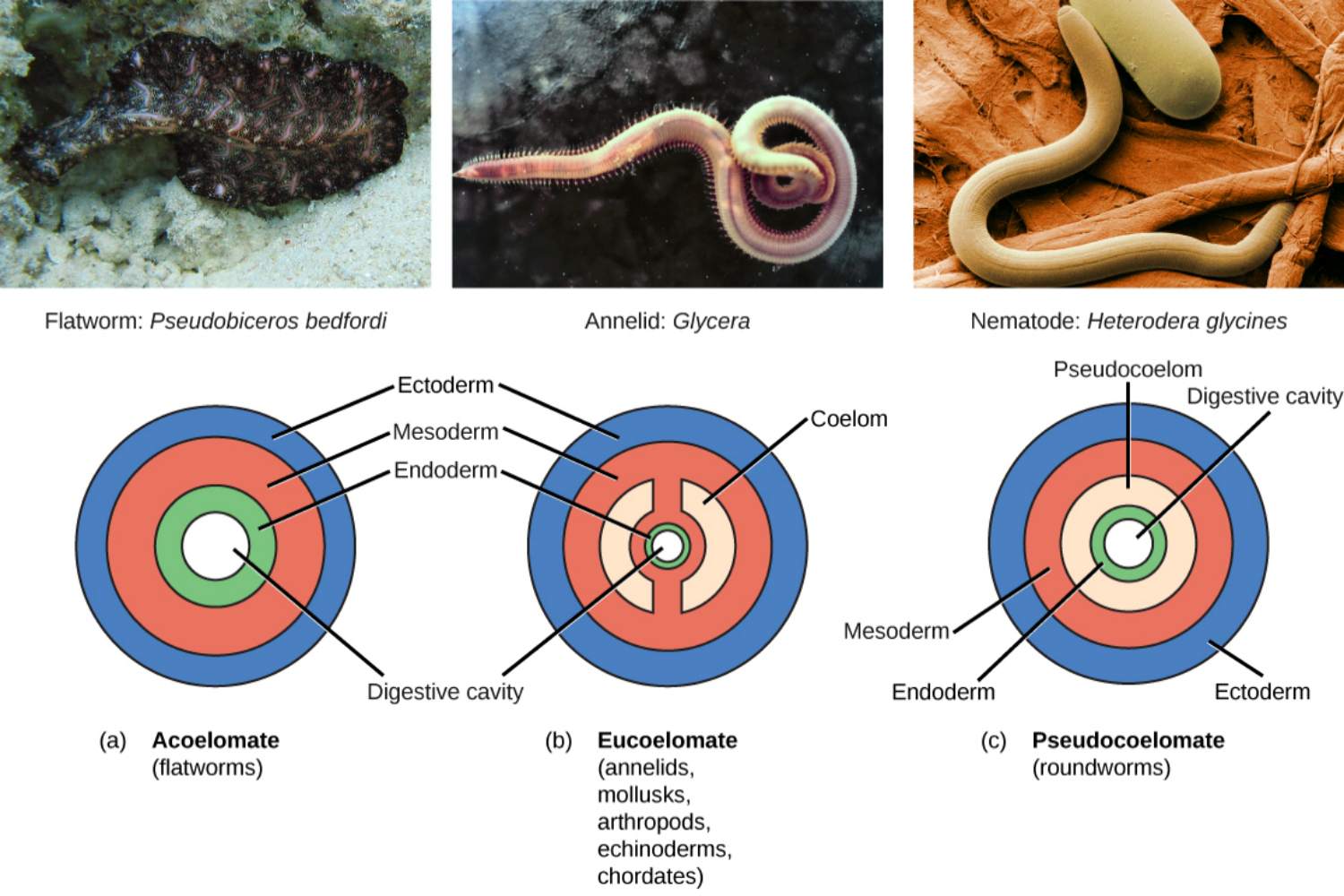 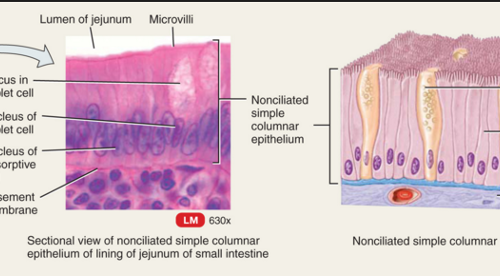